I Want a Fun Funeral loves all things fun, and games are particularly irresistible. 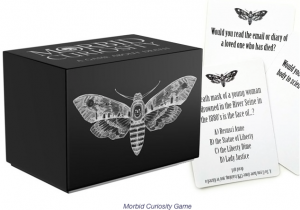 How about a game called Morbid Curiosity that’s after my own heart… for the sole purpose of making the topic of death easier to discuss, and having fun in the process. Since I missed the boat on being a part of it, the least I can do is spread the word.

The very condensed version of how it came to be is that a therapist at a grief center observed how children were simply curious in a conversation about death, they didn’t have the anxiety that adults have. They were able to have fun exploring, whereas adults just “squirm.” The therapist, soon-to-be-designer of Morbid Curiosity, realized that adults needed something to “regain their wonder with death.” And smart woman that she clearly is, knew it had to be fun.

The end result is a card game of both trivia and discussion. Obviously, it’s not a competitive game to win, it’s an excuse to talk about a hard topic with playfulness and ease. Think about it, we’ll never get any better with DEATH if we keep refusing to accept its normality. I’ve been guilty of this, too, I have to admit. Even I, Ms. I Want a Fun Funeral, have to be vigilant, because in everyday conversation it’s so ingrained in us to poo-poo any reference to the time we won’t exist anymore.

I supported their Kickstarter campaign even though they already surpassed their goal. Beware if you’re in my neighborhood, ’cause you might be invited to come play with me as soon as it’s here. (And if you already know you want to be there, let me know.)

Consider this another Public Service Announcement on the liberating benefits of looking Death in the eye and saying Game On! We can’t win it, but it’s always been about the journey anyway.