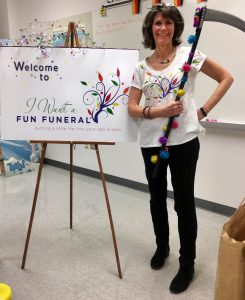 Ever wonder what goes on behind the curious door of an I Want a Fun Funeral workshop? There is a bit of enchantment and every one has its own personality.

I’ve shared a lot about what kind of information I share at my workshops: home funerals, shroud burials, buying you own casket, deciding your music ahead of time, and so on. (See years’ worth of blog posts.)

Today I want to unveil the other side of the workshop — personal experiences shared by participants in the workshop. Here’s just a snippet:

• Two sisters, spur of the moment, going to the crematory with cups of Daddy’s favorite coffee, for a witness cremation (being present for the cremation as an observer, or even pushing the button to get it started; and if desired, prayers, a ceremony, or whatever you feel moved to do). Which may be to drink Daddy’s coffee while talking about how much you loved and will miss him.

• A gal so enthusiastic about writing her own obituary (which she had that very morning, no less) that for everyone in the room it went from seeming like a chore to being an irresistible chance to leave your mark of joy and laughter in the world.

• An unfortunate story of a friend who had specially bought a blue négligée as her going-away outfit, carefully moving it with her while downsizing from house to apartment to nursing home, only to not be buried in it because she hadn’t told her family that’s what she wanted. It was left hanging in her closet, tags still on.

• A man who’s been recording videos of himself talking to his adult kids, that he’s leaving for them as a surprise once he’s gone.

• A heartbroken report of a woman whose mother died after a long and juicy, ahead-of-her-time life of adventures, accomplishments and crazy tales, and barely little more than her name was mentioned at her funeral, delivered by a funeral director who hadn’t known her (and apparently didn’t care very much).

• A last wish that engraved wine glasses be passed out to all funeral attendees as keepsakes, though not until they first toasted her with her favorite chardonnay.

• A church organist of 40 years who’d been to thousands of funerals over the years, acknowledging her cynicism—but after two hours said she felt happier about it than she expected.

• An inspiring man sharing that he was going to leave thank you notes for all his friends, since it was because of them he’d had a wonderful life.

• An overwhelming number of people reporting that their friends or family thought they were nuts for coming to a fun funeral class! (Which they all report through wide grins and laughs.)

My two hour workshop is a drop in the bucket in the scheme of your life. But if it can inspire and motivate you to think bigger and better about your last wishes, be convinced of the value of planning ahead, and believe-it-or-not have you enthusiastic about doing it — I’m a happy camper to facilitate that party.